Adolescent girls and women in South Africa continue to experience significant risk of HIV, especially when pregnant or breastfeeding. If women acquire HIV during this time, they are at increased risk of transmitting HIV to their infant during pregnancy, labour or breastfeeding.

Thankfully we have seen significant declines in new infant infections in the last two decades, decreasing from over 400,000 in 2000 to 152,000 in 2020. But the pace of the decline has slowed in recent years. At the current rate, there is growing concern that progress towards the elimination of mother-to-child HIV to their infant during pregnancy, labour or breastfeeding. 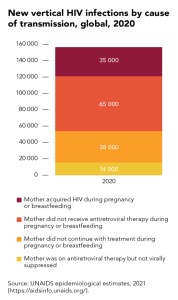 HIV transmission (EMTCT) has stalled. The targets for 2020 – fewer than 20,000 new child HIV infections – were missed by a substantial margin.

Despite this, I remain confident that we can ELIMINATE infant HIV in the coming decade. To do so, we need continued research, funding and most of all understanding to enable this change.

Here is my story of how I became involved in this field….

I share this writing with you here, so we can build more knowledge and understanding of this health and human rights issue, that affects so many people around us.  As a Jew, I feel strongly about my role in repairing the world (Tikkun Olam) and working with my community of women, around the world, to strengthen and empower us all to live healthy, fulfilling lives.

When I started working with pregnant women as a Peace Corps Volunteer in Gabon, Central Africa, I was fresh out of University from Colorado (USA). I was 22 years old. I was trained to counsel pregnant and postpartum women about HIV and other sexually transmitted infections. Most women were my age or younger, and some had several children already. I did not yet have children. But I lived in their community where I learned from them and with them about their stories and their vulnerability.

Most pregnant women were already married and had never used condoms. Most women had never seen a condom in rural Gabon. How to get a young, pregnant woman to start using condoms was very challenging. My work quickly changed from working on “behaviour change” to listening with compassion and empathy. It was there that I found my love for public health.  Working to empower young women became my passion.

I have continued this role in my current work as an Associate Professor of Epidemiology at the University of California Los Angeles (USA) and the University of Cape Town (UCT), where I conduct HIV and reproductive health studies among pregnant and breastfeeding women. Here I implement research on how best to improve maternal HIV care and prevention to empower her to prevent HIV infection and protect her infant as well.

PrEP (pre-exposure prophylaxis) is the use of ARV drugs by HIV-negative individuals to reduce the acquisition of HIV infection. The results from randomized trials and other demonstration projects, including our own, found oral PrEP containing tenofovir to be safe and protective against HIV infection across populations, including pregnant and breastfeeding women. 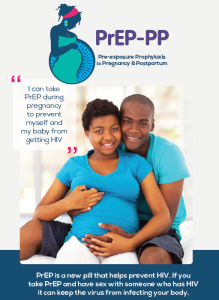 However, some women report facing challenges to taking daily oral PrEP. These include the need to take a pill every day, opposition to their taking oral PrEP from partners and side-effects that may occur during the first month of use. These concerns suggest that additional options are needed for PrEP delivery, including long-acting PrEP products that are potentially more discrete, do not rely on daily adherence and have less side effects.

Expanding PrEP to include different consumption options will become key in the near future. For now we continue to work with pregnant women to counsel them on methods to treat and prevent HIV and to prevent their infant from acquiring it.

I remain passionate about my work improving the integration of HIV prevention and reproductive health options for pregnant and breastfeeding women in South Africa. I am also confident that we can and will ELIMINATE infant HIV in the coming decade.

Dr. Dvora Joseph Davey is a member of The Mensch Network. Click to learn more about Dvora’s work at UCLA  and University of Cape Town or follow her on Twitter

Mensch is a social Justice NGO, committed to capacitating and supporting our Jewish Community’s response towards Social Justice in South Africa. Click HERE to read more about Mensch.